Facebook is currently testing a big algorithm change which will remove non-promoted posts by pages from your news feed, leaving only posts from friends and advertisements.

The change is currently being tested in six countries, including Slovakia, Serbia and Sri Lanka – and will seemingly make pages even less attractive to those looking to grow their social media following for themselves or their business.

It has been more difficult to get engagement and reach from your Facebook page than it has from your personal profile for a long time now, and this will make it even more difficult and have a big impact on how people use Facebook.

Recently there has been a huge upswing in people setting up communities via Facebook groups, it’s much easier to involve your followers in groups and they will receive more notifications of your updates. If Facebook rolls out this change we can probably expect to see a lot more groups and fewer pages.

The main benefit of Facebook pages is running Facebook Ads, which can be used to retarget existing customers, people who have visited your website or those on your mailing list. So it’s unlikely this will be the end of pages altogether – but it will be interesting to see how it affects the dynamic of how we use Facebook.

In current tests pages have been a 60% to 80% fall in engagement – which will destroy many small business pages who rely on organic reach via social media channels such as Facebook.

If this feels like a squeeze by Facebook to get more money out of their users to reach their own followers – then that’s probably because it is. It has been summed up quite aptly by Matt Inman of The Oatmeal in the cartoon below: 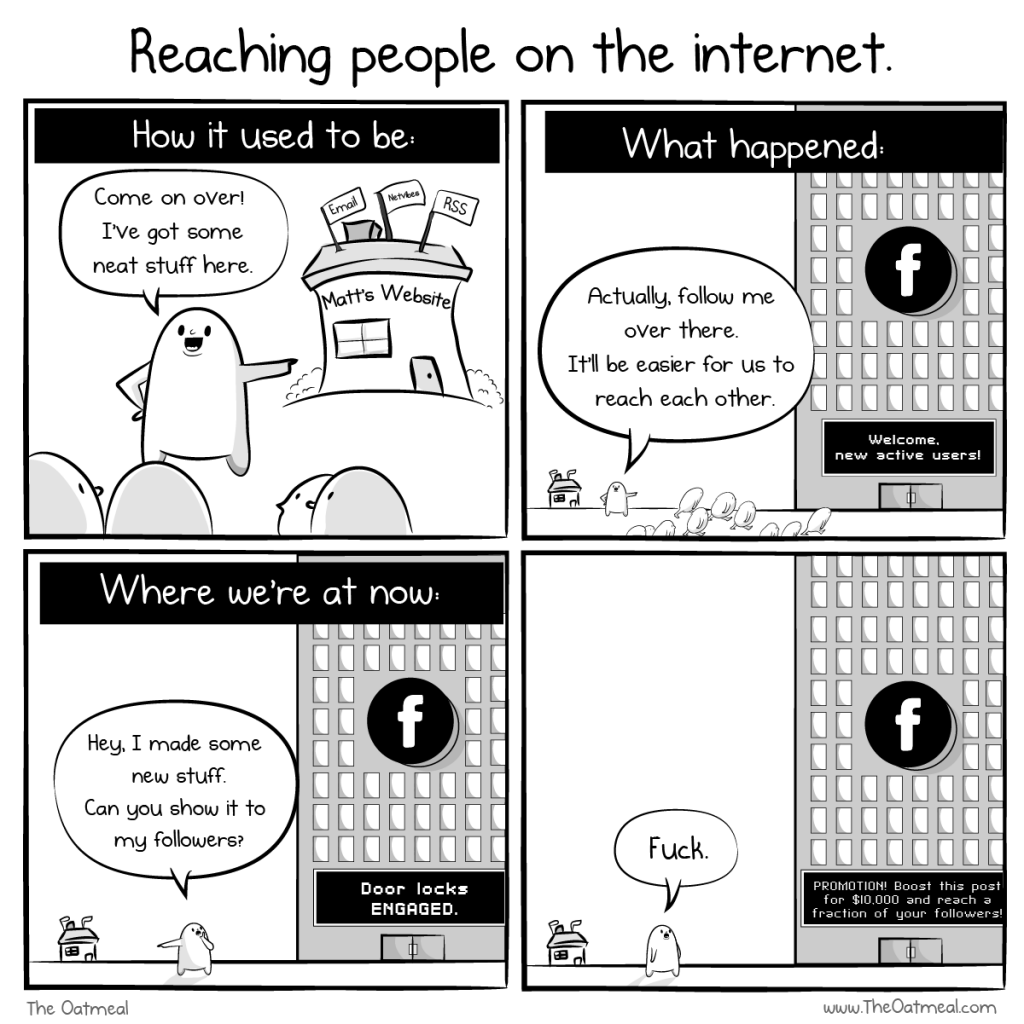 Where will it end? Who knows – it’s difficult to say if Facebook will implement the changes worldwide as it decides whether the short-term cash influx, by forcing Pages to run more ads, is worth the possible long-term detrimental effects on the Facebook brand.

Facebook has in recent years been able to pretty much do what they want, as Twitter has become an echo chamber and LinkedIn has for years been full of “me” posts, sales pitches and job advertisements.

But this could all be changing, in the past month or two LinkedIn has been making a comeback as users have pivoted to sharing personal and engaging stories – this will have a huge impact on Facebook’s plans as many users are currently finding much more successful networking and sharing opportunities via LinkedIn over Facebook.

If Facebook continues to push its users for more revenue, there will be a point when it’s users will begin to push back. It’s not unheard of for the dominant social media player to become abandoned (MySpace anyone?) in place of the newest shiny network.

We don’t yet know if Facebook will roll out these changes worldwide, but it’s worth keeping an eye on what they’re doing. It shows the importance of being able to control your own data (such as having a customer mailing list) so it doesn’t crush you too hard when social channels change their algorithms – and the importance of being adaptable to pivoting onto different channels such as LinkedIn.

If you haven’t been active on LinkedIn recently, you can re-start by adding me here – be sure to send me a message and introduce yourself.